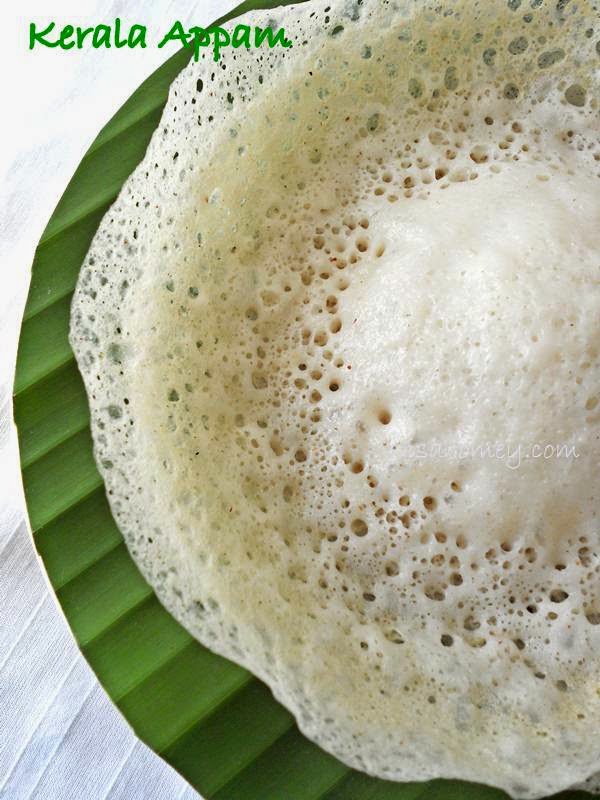 Kerala Appam Recipe- appam or palappam also known as Srilankan hoppers is one of the most favorite breakfast of Kerala; its vegan and gluten free too. In some parts of Kerala it is also known as Lace Appam. Usually, appam is made for an elaborate Sunday breakfast and paired with mutton or chicken stew....I remember indulging in appam and stew as a kid after Sunday Mass.......or when there is a special occasion in the family...palappam and stew is the preferred choice.

Towards, the North of Kerala, appam is known as vellayappam, but I have noticed that both are totally different as palappam is fermented traditionally with "kallu" or coconut toddy and nowadays with  yeast. For vellayappam it is fermented with coconut water itself and a pinch of baking soda....though I have tried it a few times, but was not satisfied with the result hence it still has not found its place here on the blog.

Back in October 2010 I posted palappam recipe and at at that time, I used active dry yeast which has to be proofed or make the yeast rise with tepid water and sugar.......and in that recipe, there is an addition of egg; which was amma's tip to make the appam tender in the middle and crispy and lace like on the sides......so, after I started using instant yeast....I started omitting the egg and the appam turns out absolutely perfect!! .....also, back in 2010  I really did not know a thing or two about blogging or photography.....so, later in 2013, I updated the picture (as the original picture was really blurry)....some of my relatives and friends tried the recipe and it was a success...I even got a comment asking how to double this recipe for making 100 appams!!

Again, proofing active dry yeast was not a breeze for some....though when I get personal mails and messages, I'd help as much as I can from this side of the computer :) as I started getting good quality instant yeast...I started making appam with that....and the best thing about instant yeast is that, you do not need to proof it...adding it while blending is enough (the slight heat from the blender helps in proofing) even for pizzas I now use instant yeast....and it is so easy and during the summers it will rise within an hour or two.... .....again, when someone asked me for easy vattayappam....I posted that and let me say....both palappam and vattayappam batter is almost the same....though for vattayappam batter should be thick.

Let me also mention that these days, I make appam for dinner....the reason is that it just takes 2-3 hours (during summers) for the batter to rise...so, I just have to remember to soak raw rice....and grind the batter at about 5 pm and and by 7.30-8.00 pm appam batter is ready!! (remember I mentioned just adding instant yeast while blending is enough for it to proof)......again, the step by step pictures are taken at night and the batter pics when I grinded in the evening....the final picture was taken next morning.

Some like the laced sides to be a little bit browned....some like it to be all white....if you prefer the former....just leave it on the "appa chatti" for a few seconds longer.

There are non stick appa chatti or appam pans......but I prefer to use my old iron appa chatti.

Amma used to tell me that during her younger days, she used to make with fresh rice flour and it was such a tedious process .....and with high speed blenders hitting the market.....making with soaked raw rice is easy.....still if anyone wants to know the traditional method of making with rice flour, kappi etc...feel free to inbox me :)

So lets make appams! You know what?? making appams were easier than writing this post!!

Step By Step Method:
Make sure you soak raw rice for at least two hours....I usually wash and clean the rice after soaking. Put the drained rice into the blender, add in 1 cup grated coconut, 1 cup cooked rice, sugar, and salt.

Add 1 tsp instant yeast and water....do not add too much water....water should just cover ingredients.
Grind to a smooth batter.

Pour into a steel container or glass bowl....and keep it for 2-3 hours or until the batter ferment and rise up.....although weather plays an important part in the fermentation....keep this factor in mind....if you live in a cold place....it might take overnight or anywhere between 4 to 6 hours atleast.

Once the batter is ready, just mix with a ladle and if the batter is very thick you can adjust with water (remember we did not add much water while grinding)....the batter should be of flowing consistency....neither too thick nor too thin, do not forget to check salt too.

This is my worn out  old iron appa chatti or appam pan, place it over heat, and lightly grease it with a cloth dipped in oil....simmer the fire to medium, and pour a generous ladle full of batter, immediately turn and tilt the pan in circle so that the batter spreads in circle. Cover and let it cook for 2 min.....as I mentioned earlier, some like the sides to be nicely browned and crisp....some like it to be on the whiter side....there is no need to drizzle oil over appam....but covering with a lid is important as the steam from it will help the center part to get cooked. Open the lid, and once the sides are crisp....remove and serve....make the rest of the batter the same way. 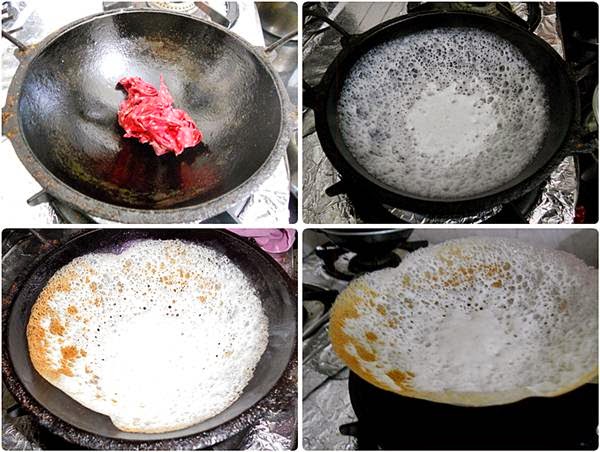 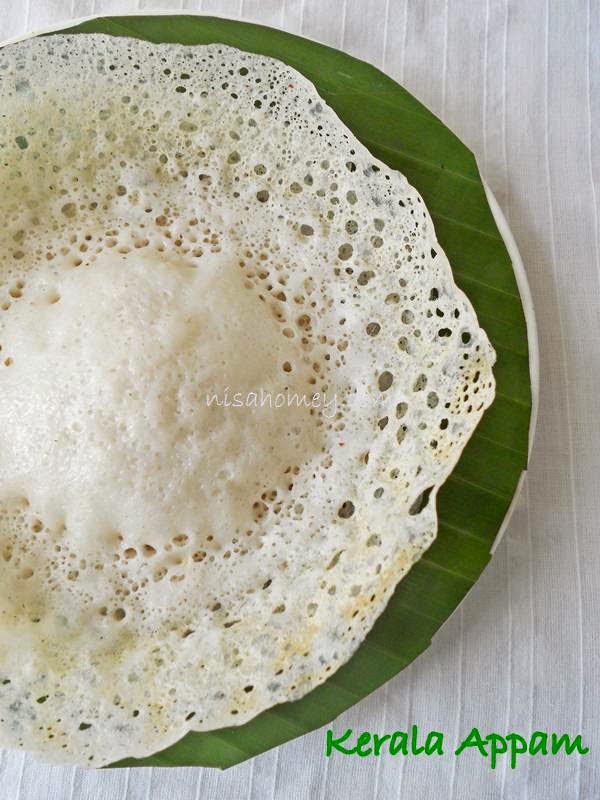