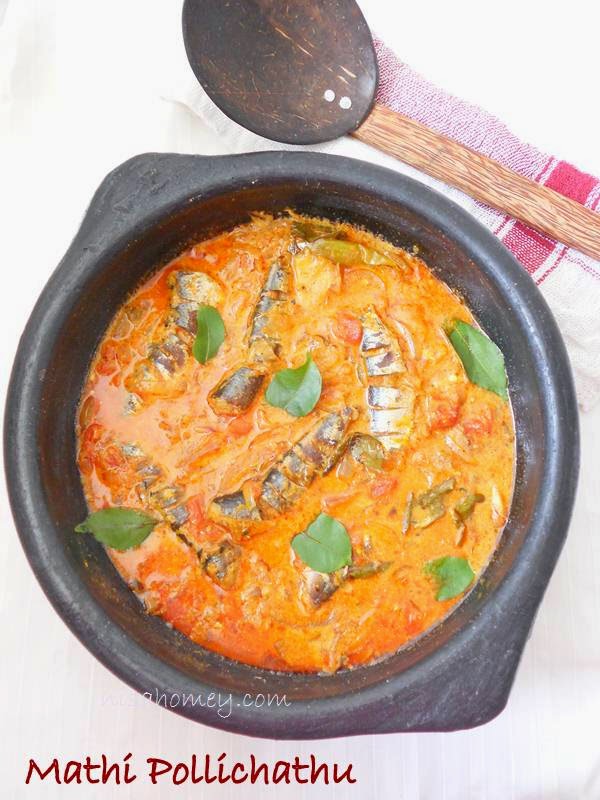 Mathi Pollichathu is an easy traditional fish curry of Kerala. Mathi or sardines are cooked in tomatoes and coconut milk, with coconut oil. Meen pollichathu is usually made in vazhayila or banana leaf, and the most favorite is karimeen pollichathu. Mathi / Sardines are very healthy and a rich source of omega-3 fatty acids, and it is always best to include these kinds of low fat curries in our daily diet.

Pollichathu literally means heating up, so traditionally, fish  and the masala are wrapped in banana leaf and heated on a clay pot over slow fire. Shallots or cheriya ulli is used instead of onion. This recipe is twisted to a modern version by amma and she uses onions and without banana leaf....if you have access to banana leaf, you can cover the curry with the leaf, so that the subtle flavor seeps in....in good old days, amma says that my grandmother used to make with less tomato and used toddy vinegar....but here I am using synthetic vinegar. 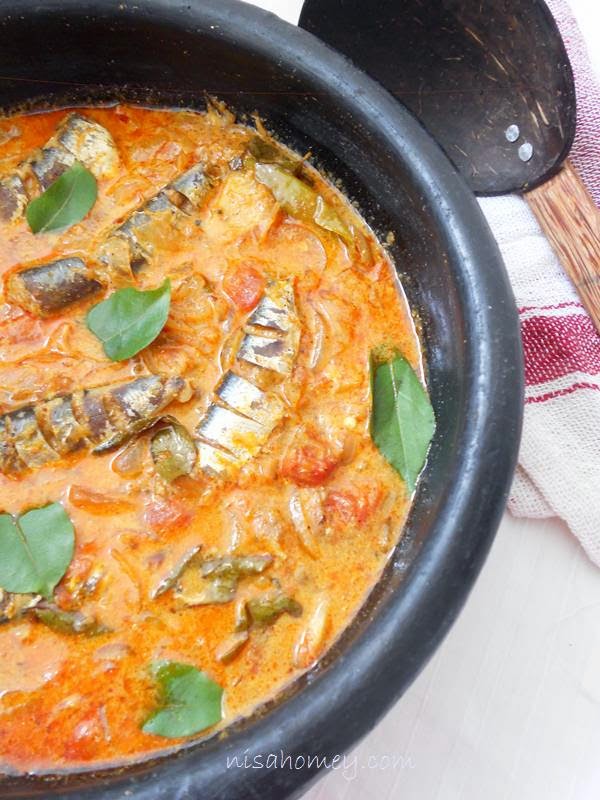 This mathi (sardine) pollichathu is amma's version, it is a semi gravy type unlike the usual mathi pollicathu in banana leaf (vazhayila). Amma taught me this, back in 1996 when I was a new bride and during those days, it was good old snail mail that helped me....she used to write recipes and post it in an inland, ah! those were good old days...were postman was awaited upon eagerly....I do have that particular letter of hers some where in which she has written the recipe for chicken soup and meen pollichathu.....

This particular mathi pollichathu is low calorie, has just about one tablespoon of coconut oil, the onions are just lightly sauteed and the fish is first allowed to cook in the tomatoes.....if you puree the tomatoes the curry or gravy would be really thick and fiery red...it is also best to use ball tomatoes which has nice red colour and less sour....if using country tomatoes...you will not get this nice red colour...... this version is a simple, everyday fish curry, nothing fancy.....but cooked with very less oil, a kind of curry which you can indulge in without any guilt. It goes perfect with roti or warm rice. You  can also substitute with cows milk instead of coconut milk....and just be careful not to bring it to a boil....as it might curdle.

Amma adds a bit of whole spices to the oil instead of mustard seeds.....and that kind of takes this simple curry to the next level....try it!! mathi is in season, it is low cost and healthy!

How I made:.
Put all the ingredients under "marination" in a small blender and grind coarsely. Rub it all over the fish and keep aside.

I used a large onion.  I like to use my "manchatti" or clay pot, you can use a kadai or a nonstick pan. Heat 1 tbsp of coconut oil. Add in the spices. Add in the sliced onions, green chillies. Lightly fry it in hot oil for a minute and then reduce the flame to medium, we do not want the onions to be browned.....we just want it to be lightly cooked or in malayalam we say "onnu vadiyal mathi". Also since I added the ginger and garlic to the marination I did not add it along with the onion, though if you prefer you can add it here and skip adding in the marination.

Once the onion starts to get cooked, add in 1 tsp Kashmiri Chilly Powder, stir it well.....after the raw flavor diminishes....add in the chopped tomatoes....chop them very finely (you can also puree them).

Allow the tomatoes to incorporate into the onion by mixing well....about 2 min. Remove half of the tomato onion mix into a plate. Spread out the onion mix in the chatti and layer the marinated fish on top of it. Then spread the other half (which we removed earlier) on top.

Once steam starts to come, cover the pan for 3 to 4 minutes and put the flame on low, the juice of tomatoes will start to come up as you can see in the second picture. Allow the juice to dry up it might take another 2 to 3 minutes....also make sure that the bottom is not getting burned...twirl the chatti or run a spatula under the pan (if you are using non stick pan, it might not be much of a bother (hopefully). As you can see from the last picture....the juice has all dried up.

Lastly, pour one cup of thick coconut milk, I used ready made coconut milk powder mixed in one cup of water.....or you can use fresh coconut milk....for those who do not have access to both, you can substitute with milk....just be a bit careful so that it does not curdle....and it is best to add milk in low flame.

Enjoy with roti/chapathi or warm rice. 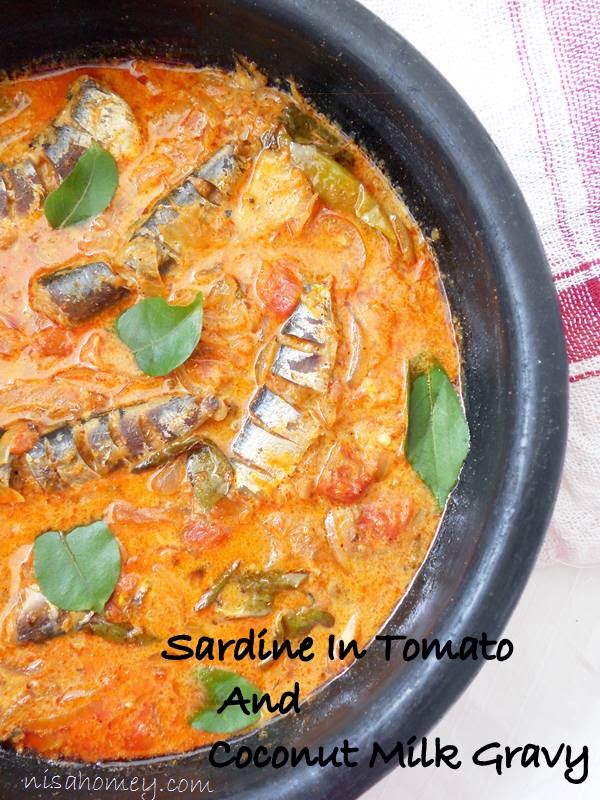 Notes:
Since, this is a low calorie version made with minimal oil as possible. I have skipped lightly frying (searing) the fish. You can do so in coconut oil if you prefer, like I have done for karimeen pollichathu.
I added the ginger and garlic to the marination, you can also skip that and add to the onion while sauteing...
Though, I add tomatoes, a little bit of vinegar is necessary for flavor. So try not to omit it.
Curry leaves are a must!