How To Make Cake In A Pressure Cooker 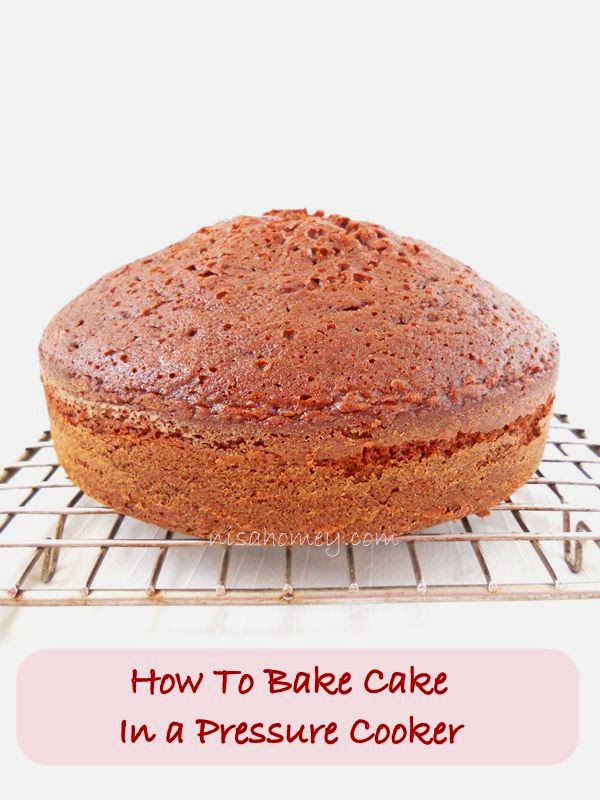 How To Make (Bake) Cake In A Pressure Cooker or how to make cake without an oven is a query I get often and though I prefer my OTG oven over everything else. I was forced to take my pressure cooker to bake this best-ever-easy chocolate cake. Want to hear more of this no oven cake?

Let me clarify that I never imagined I will post this, this just happened due to some unforeseen circumstances. I am sure a few of my readers like Thaseen would be very happy that God made me into baking in a pressure cooker. You see, sometimes things never go as we plan; its decided by HIM.

Monsoons, bring in a kind of chill and crispness to the weather here in Kerala, though I love rains, monsoon is my favorite season; it also brings in power outrages. At times the weather plays havoc with rains and wind lashing out, it is very common to experience power cuts due to snapping off lines by a fallen tree in the wind.

And the day I decided to bake some more Texas sheet cake; power snapped its  life out! exactly the moment I finished creaming the batter and was just going to pour it into the sheet pan. Power-died-on-ME!

I was like, NO! it wont die on me! I ran to the other rooms and checked, but yes! there was no power! All I could think of was about the cake batter and the promise I gave to my daughter that I will bake another batch for her.

A panicked call to the KSEB board confirmed that power will be restored only late evening; and I was crestfallen; and kept thinking what to do next as I kept the phone down.

Oh! yes!! my good old pressure cooker! well, to be honest I am not a big fan of pressure cooker baking; pressure cookers are meant for cooking and not baking; and living in a hill station like Coorg for a long time (where power outrages were so common) I have had enough experience of baking in it; so I took out the largest pressure cooker I have and divided the batter into two pans and baked them for a good one hour each! The result, I got the best cakes ever! not one, but TWO! and that my friends is what we call the work of unseen hands. 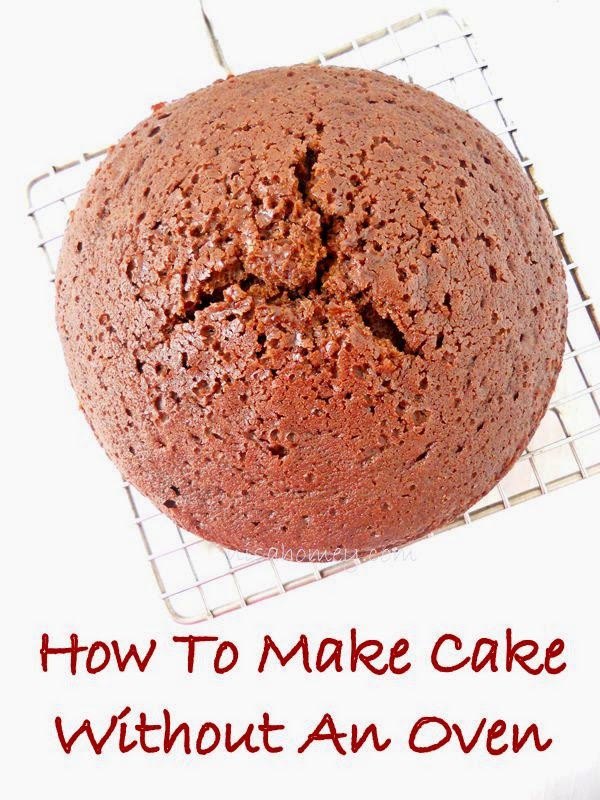 Notes:
Keep in mind that pressure cookers(US) are meant for cooking and not for baking in high heat.
If you make a regular practice of making cake in cooker; then your cooker might start to have some faults and it might compromise your safety.
Let me assure you that this is the first cake made (baked) in a pressure cooker(India) in about 7 years. So, keep in mind that it is used as a last resort like when your oven died on you or you have a sudden power outrage.
Before posting this; I just googled and found that some bloggers have already posted this method; but they used the cooker without the gasket or rubber band but I use the gasket as it will seal the heat in... and the cake bakes perfectly and will not be very moist or has a moist wet texture or have a dry sort of slightly burned flavor.
You can see from the picture that the cake is perfect in texture, since this was baked for a friend of my daughter; I could not cut it to show you the inside of the cake; but then it is said a "picture speaks a thousand words".
Let me also warn you that the cooker will be heated up to the maximum, so please take care not to burn yourself.

Author: Nisa Homey
Cooking Time : 1 hour.
How I Bake Cake In My Pressure Cooker:
I used this to insulate heat evenly in between the cake pan and the cooker; if you dont have the stand that comes along with the cooker; try a plate or something similar. Usually pressure cooker comes with a stand; but I lost mine somewhere and so used this which came along with my rice cooker.
It is important to preheat the cooker for sometime; place it over fire, once the cooker starts to heat; I simmered the fire. (I did not close the cooker with its lid while heating)

Do not remove the gasket (rubber band) inside the cooker, as this will seal in the heat and helps in even baking.  Place the cake pan very carefully in the hot cooker (use a pot holder or you might scald your hands). Close the cooker...remember the flame is on low.

Close the lid of the cooker with the gasket on and do not add any water, remember the cooker is on low heat. Keep this on the fire for almost 45 minutes to 1 hour or until a tooth pick inserted in the middle comes out clean. (pst!! that is my reflection on the cooker, ha!)

I did open after about 40 minutes to check if the cake is done; but had to wait for 1 hour, so opening to peek in between is alright, atleast for me. I opened the cooker again and when my tooth pick came out clean....I let the cake rest for sometime in the cooker, say for about 5 minutes. The cake also came off the pan, perfectly! Allow the cake to cool over a cake wire....this cake is dense, like a pound cake; perfect for frosting.
A'int my cake a chocolate beauty?? 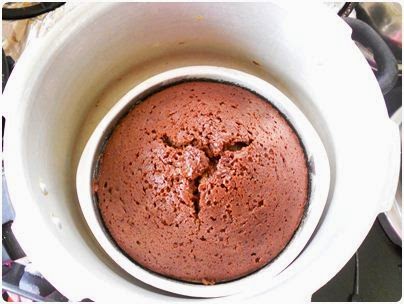