Pizza Without Oven | No Yeast Pizza | Pizza On Tawa 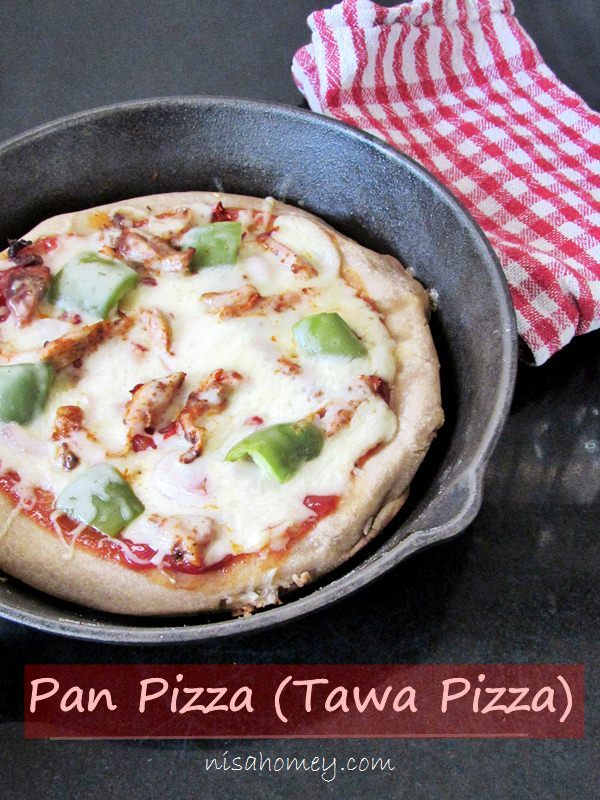 Pizza without oven or yeast, learn to make pizza on tawa.

Making pizza on tawa is a boon to those who do not have oven, yes pan pizza is easy to make.  You also do not have to add yeast to proof the pizza dough I know some of you will be happy to hear this. This recipe is to those who would want to make pizza on their tawa (iron skillet pan), pizza on stove top.

No yeast pizza is fairly easy to make, remember some days back I shared butter naan and so I had one left over naan and I thought why not make pizza with it (that naan was so soft and yum). So I placed it on my good old tawa and dressed it up like a real Italian pizza and my kids swooned over it, especially my daughter but remember I had only one left over naan. So, I made another batch of naan dough but did not make naan but made these pizza instead!

Tawa pizza is so easy to make and is a boon when sudden power cuts come, dont you think so?  We do need to learn to make things without the oven, BTW have you tried out my pressure cooker cake??

Lets talk about this pizza dough; I used whole wheat flour and because it does not have much gluten it does not "double" as much as a dough made with "flour" (maida). Its no secret that I try to make daily meal as healthy as possible; so maida (flour) is not invited when I make meals for my family except ofcourse with cakes / desserts. But if you are not so into the health freak mode; then you can make with flour. 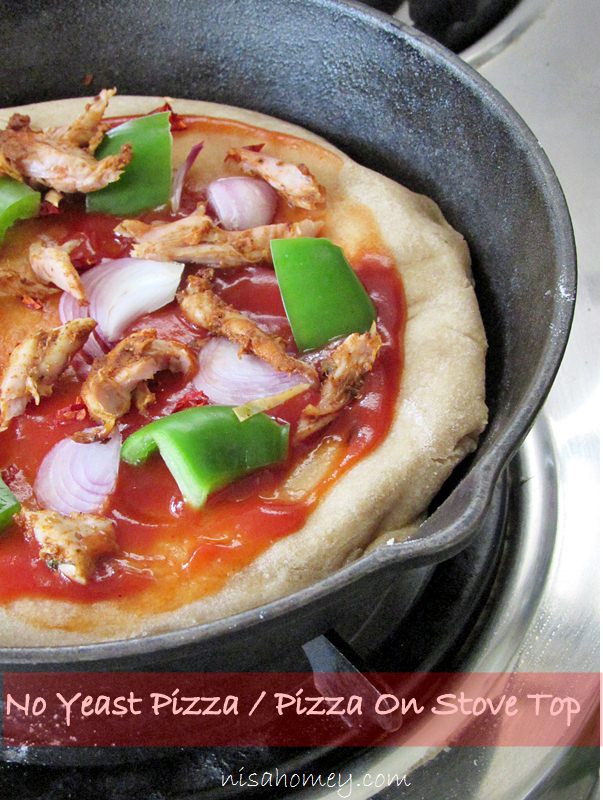 About toppings; you can spread my easy homemade pizza sauce or if you are in a hurry just plain tomato sauce would be fine but of course with a generous sprinkle of Italian seasonings. If you have some left over chicken gravy, you can spread that out instead of tomato sauce; like I made butter chicken pizza. I had some left over tandoori chicken, so I made my favorite tandoori chicken pizza.

Into a large bowl add in two cups of whole wheat flour,  half cup of plain flour (maida), 1/2 tsp baking powder, 1/4 tsp baking soda, and 1/2 tsp salt. Mix everything nicely and make a well in the center with a spoon. Add in 3 tbsp thick curd (yogurt), 1 tbsp sugar, 2 tbsp oil, and about 3/4 to 1 cup of water

Mix lightly with a spoon and then add water and knead into a smooth dough (I did knead on the counter for a few minutes). Grease your hands with some oil and pat on top of the dough, so that it is nicely coated with oil and does not form a dry crust after sometime. Keep the bowl in a warm place for 4 to 6 hours.

Once the dough has risen; lightly press it down to release the trapped air and divide into two or four balls (if you like thin pizza base, then divide into four).

Heat a tawa or iron skillet pan; while it is heating, roll out the dough into a circular (it should fit your tawa). And gently place the rolled out pizza dough into the hot tawa and simmer for 2-3 min or until that side is cooked and lightly browned.

Now flip to the other side and spread pizza topping on the cooked side. Drizzle a tiny bit of oil around the sides to that the base becomes slightly crisp.

Cover the pan and cook until cheese melts or the base is cooked (about 3-6 mins on low flame). Note that the first base I made in my iron skillet and the second one on my roti tawa.
Remove when done and serve.

Pizza Without Oven | No Yeast Pizza | Pizza On Tawa